(Silang/ October 16, 2018) – The second day of the Provincial Chapter began with the praying of the Lauds presided by Fr. Carlos Guzman, followed by the celebration of the Holy Mass presided by the Most Rev. Rey Evangelista, DD, Bishop of Imus. In his homily, he highlighted the value of the Devotion to the Sacred Heart of Jesus, in as much as we celebrate today the Memorial of St. Margaret Alacoque. He reminded the Rogationists of the essential link of this devotion to their identity and mission. He exhorted them that it is their duty to penetrate every day the Sacred Heart of Christ and understand deeply its intimate pains and sorrows. He further reminded them to radiate the love of the Sacred Heart in their personal lives, in the ministry, and in the community. He emphasized the importance of mercy, compassion and loving kindness over ritual externalities. Before the final blessing, Fr. Bruno Rampazzo and Fr. Herman Abcede presented the token of appreciation to Bishop Evangelista. After the mass, the assembly had the picture taking with the Bishop and then the breakfast.

At 9:00 in the morning, the assembly of 96 capitulars gathered once again in the Di Francia auditorium to begin the second plenary session. Fr. Montana then gave a brief orientation on the matters to be done in this session and also the rules to be followed in voting for the approval of proposals. The Proposed Revisions of the SMP Directory, namely: the designation of the Provincial Councilors analogous to those of the General Councilors, and the election of the Provincial Treasurer who is not a Provincial Councilor, were then presented by section and the Chapter unanimously voted in favor of the proposals.

The Modorator read the greetings and prayers received, particularly those coming from the community of the General Curia through Fr. Siciliano and the Catholic Bishop’s Conference of the Philippines through the CBCP Secretary General. Also the greetings from the Rogationist community of Poland and the Augustinian Missionaries Sisters were read to the assembly.

The floor was then given to Fr. Herman Abcede for the Report of the Provincial Superior that covered the term 2015-2018. The Provincial concluded his report with a very hopeful note about the Province’s potentialities and a very positive regard about the capacities of the Religious who will be tasked to lead the Province.

Then the Councilors presented their report by sector. Fr. Ariel Tecson on the Sector of Religious Life, Formation, and Vocation Ministry. Fr. Ariel also presented the salient points of the Revised Manual of Formation ad experimentum.

After the reports, Fr. Abcede read the letter of the Superior General, with the consent of the General Councilors, authorizing the modification of the Directory of the Province that was voted during the Plenary Assembly in the morning. The modifications will be implemented in the upcoming election of the Provincial Government on October 18, Feast of St. Luke. Then, the assembly proceeded with the open forum for their questions, comments, clarifications and suggestions about the reports made. 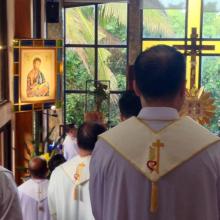 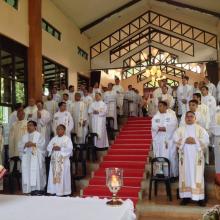 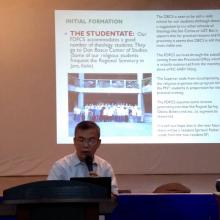 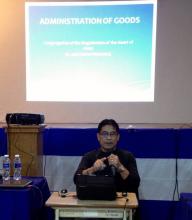 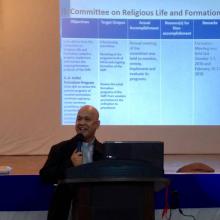 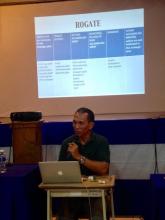 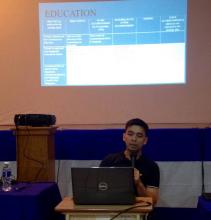