(Silang/October 17, 2018) – The third day of the Provincial Chapter of St. Matthew Province was dedicated to a moment of reflection, sharing of experiences, and a community prayer in adoration before the Blessed Sacrament. Fr. Herman Abcede, opened the day with the Holy Eucharist. In his homily, he emphasized the importance of being led and renewed by the Holy Spirit. He explained that this is something needed by all, especially by those who will be elected to lead the Province in the coming years. Speaking from his personal experience, he described the task of leading as a life of sacrificial service. Taking the inspiration from the first reading of the Liturgy of the Word from the Letter of Paul to the Galatians, he advised that those who will be given the responsibility of leadership ought to become like Christ and must lead like Christ. He said that this is only realized when the person is filled with the Holy Spirit.

At 9:00AM, the capitulars gathered again in the Di Francia Auditorium for a recollection. Fr. Jose Maria Ezpeleta, Vicar General, gave insights for reflection on the theme of the Provincial Chapter, focused the challenges the congregation in today’s world, to discover ways to respond to these challenges based on our identity as consecrated Rogationists, and to draw points for reflection on SMP governance and leadership. Sharing in groups of fives followed.

At 3:30PM the assembly gathered again in the Di Francia Auditorium to listen to the response of Fr. Abcede to clarifications, suggestions, and comments raised about their reports in the previous day. Afterwards he expressed his gratitude to all for their patience and contributions in many ways. He also asked pardon for his misgivings and mistakes.

After the break, the film “For Love of the Poor” on the vocation story of St. Hannibal Mary Di Francia produced by the Province of St. Luke, was shown in the auditorium for those who wished to watch it as inspiration and input in this day of recollection. The rest spent the time in silent prayer and reflection. To conclude the day, they had an Adoration in the Oasis Chapel to pray for enlightenment from the Holy Spirit for the election of the Provincial Council scheduled tomorrow. 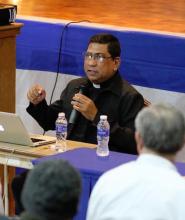 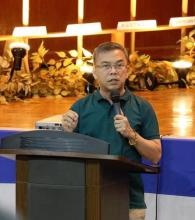