(October 15, 2018) – The Rogationists of the Heart of Jesus – St. Matthew Province started its 2nd Provincial Chapter with the theme “Our Charismatic Identity in the Challenges of the St. Matthew Province.” The event which will end on October 20, 2018 was held in St. Anthony’s Boys Village – Silang, Cavite. It was initiated by a short recollection done in the Di Francia Auditorium of the Rogationist College – Silang graced by the Most Rev. Pablo Virgilio S. David, D.D, Bishop of Caloocan.

The good Bishop, a scripture expert, shared his wisdom regarding some Biblical Pastoral Notes on the origin of the charism of the Rogate. In his talk, Bishop David drew important insights about the charism by linking the two Rogate gospel verses found in Mt 9:35-38 and Lk 10:1-2 with Mark 6:34-44 and John 6:1-13. With his exposition, he has contributed to giving fresh insights about the mystical harvest and the attitudes and mindset a laborer of the harvest must have. He concluded by leading everyone to the idea that the richness of the harvest is to be found in the poverty of the people.

After the talk, Fr. Bruno Rampazzo, and Fr. Herman Abcede, presented the token of gratitude to Bishop David. After the break, at around 6:00 PM, the assembly celebrated the opening mass in the St. Matthew Chapel of the Oasis of Prayer – Silang, presided by Fr. Bruno Rampazzo. After the Eucharistic celebration, a sumptuous dinner was enjoyed by all.

At around 8PM, the assembly gathered once again, this time in the Chapel of SABV for the official opening of the Provincial Chapter.  It began with a simple Liturgy of the Word presided over by Rev. Harvey Cestina, and then from the Chapel, the assembly had a candle procession while invoking the Holy Spirit as they moved towards the Di Francia Auditorium where there was the enthronement of the Bible.

Immediately after the liturgy, a general orientation was facilitated by Fr. Danny Montaña, who first presented the necessary documents that everyone was expected to read and be aware of. He then presented the flow of activities for the whole 5-day event and reminded everyone of some important matters.

After the general orientation, the President of the Chapter, Fr. Bruno Rampazzo.  Fr. Bruno immediately made a roll call of every member. Ninety-two religious were present and eight religious were absent.

After the election of the Presidential Board, there was the votation on the schedule, the assigned readers of the minutes, and the members of the press secretariat. 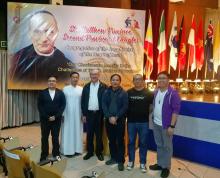 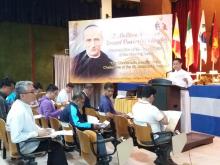 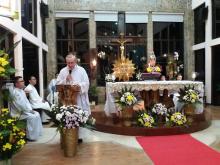