Annual Meeting of the Religious in Practical Training 2016

The Religious in Practical Training (RPT) of the St. Matthew Province had their annual meeting, encounter and bonding last October 25-29, 2016 held at the province of Bataan, Philippines, taking the theme, "In the Footsteps of St. Hannibal". Their stay in Bataan was also made possible through the efforts of the Parish Community of St. Francis Xavier and St. Hannibal Mary Di Francia Parish in Parang, Bagac, Bataan, with friends and benefactors.
On the first day, October 25, before arriving at the venue, the RPTs had their opportunity to see the place where Fr. Diego Buscio, our first Rogationist Missionary in Bataan, had planted the seed of future Rogationist Mission. Later, they had the opening Mass at St. Francis Xavier Parish presided by Fr. Ariel O. Tecson, Provincial Councilor on the Sector of Formation and Religious Life. Later in the evening, the RPTs had their Opening Ritual, then followed by bonding.
On the second day, October 26, Mass in the morning was presided by Fr. Herman Abcede, Provincial Superior. Eventually, the participants had their meeting with Fr. Jose Maria Ezpeleta, General Councilor on Formation and Religious Life, while in the afternoon, they met with Fr. Herman. Later in the afternoon, they also had the opportunity to see the present mission to Indigenous Peoples (IP) in Matalangao.
On the third day, October 27, the RPTs experienced the "Cammino del Rogate" (Rogate Pilgrim Walk) while climbing at Mt. Samat on foot. They had their open forum with the Provincial later in the afternoon. Back to the St. Francis Xavier Parish, the RPTs joined with the parishioners for their Eucharistic Adoration for Vocations and Holy Mass presided by Fr. Ranny Rodriguez, Assistant Parish Priest.
On the fourth day, October 28, the RPTs had their morning Mass with Fr. John Youn Jong Du, Responsible of the Mission in Matalangao. Throughout the morning, they went to Bagac Bay Beach Resort where they enjoyed swimming and videoke. In the afternoon, they went to Las Casas Filipinas de Acuzar and enjoyed the breathtaking tour to the 17th century Filipino houses. Evening was then spent for program, bonfire activities and bonding.
Finally, on the last day, October 29, the Vietnamese and Indonesian RPTs were accompanied by Fr. Jose Maria Ezpeleta to the Indochina Refugee Camp, dating back to 70's. Later in the morning, closing Mass was presided by Fr. Jose Maria Ezpeleta at SFX Parish. They also had their send-off ritual before going back to Manila. 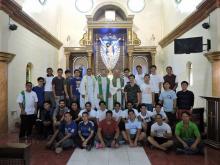 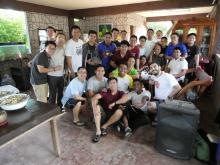