Installation of Parish Priests in the Diocese of Balanga

In a solemn liturgy presided over by Most Rev. Ruperto Santos, DD, Bishop of Balanga, on June 9, 2017, he installed the Parish Priests of his Diocese to their respective Parishes through a common rite. Among those installed was Fr. Ranny Rodriguez, who was earlier assigned as the new pastor of the St. Francis Xavier Parish in Parang, Bagac, Bataan. In his homily - which he opened by thanking his priests for accepting his decisions that resulted to the current general reshuffling of assignments - he exhorted the "shepherds" to be "Fathers" to their flock, inviting them to take care of themselves [so they may serve the people the best way they can], to be faithful to the promises (vow of poverty, obedience and celibacy) they made during their ordination and to put the Church in order [not only the structure, the most especially the spiritual life of the people]. The Prelate invited the faithful as well to help their new pastors to accomplish was he just directed them to do. He concluded by narrating a story of how once a worker in one parish in Ars, France responded to tourist who apparently belittled the small, old and dark place of worship, proudly saying that, they may have such a depraved church, but they also have a good and holy priest - St. John Marie Vianney. He expressed hope that the faithful may also say the same of their priests. After the reading of the Letter of Appointment, followed by the Renewal of Ordination Vows, the Eucharistic liturgy proceeded as usual. The event ended with a simple lunch shared by the clergy. May the Lord of the Harvest send more and holy priests! 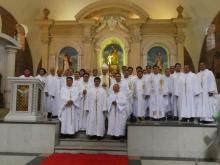 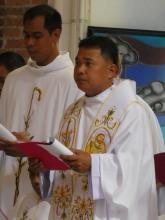 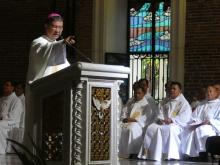