Abstract: Influenced by contemporary theatrical representations, inspired by Blessed Jacopo da Varazze's Leggenda aurea, Antonello da Messina chose to limit the extension of the spatial view of his subject in his masterpiece L'Annunziata while gathering together several actions carried out in time to express a full story in the sense of Aristotelian poetic myth. While the rationalist, modern viewer reduces this painting to a mere pictorial photogram, a full appreciation for Antonello's genius requires seeing it as just one detailed perspective of a full story of cosmic import. Antonello's choice to limit the spatial extension of his subject highlights his capability to express action in time.

The casual contemporary viewer of Antonello da Messina's small oil on wood panel painting conserved in Palermo's Palazzo Abatellis might not even recognize it as a depiction of Mary, the Mother of Jesus. And even if he does, the average viewer is often confused regarding the subject matter. Some have considered it to be a painting of Mary teaching while reading a book, using her fingers to count off a list of explained concepts. In this painting we have a striking young woman standing, sitting, or kneeling—it is not at all clear—before a bookstand, her oval face framed by a blue veil, looking out from the painting with a serene, intense, knowing gaze, with her left hand gathered to the center of her chest and her right hand stretched towards the foreground, palm forward. Who is she? What is she doing? If the causal viewer notices that the painting is entitled L'Annunziata, he will quickly understand that the Madonna is looking out from the painting towards the Archangel Gabriel. Yes, this is a painting of the Annunciation and, yes, you are caught in the middle, between the Angel and the Virgin. Once the causal observer has understood the theme, he will probably assume that he is looking through Antonello's eyes into the Virgin's room, spying one instant of her portentous encounter with the Archangel, as though observing a photograph of the moment. However, if understood in this somewhat simplistic way, the observer will have missed the genius flaunted by Antonello in this masterpiece of the Italian Renaissance.

Prior to L'Annunziata of Palermo, Antonello had painted other versions of the Annunciation, much more traditional. First, a diptych, currently conserved in Italy's National Museum of Syracuse, which shows, on the left-hand panel, a reverent Archangel greeting, a prayerful Virgin Mary, depicted on the right-hand panel with a blue-colored dove representing the Holy Spirit descending upon her.

A third Annunciation painted by Antonello, found in the Alte Pinakotech of Munich, is an intermediate between the one of Syracuse and our L'Annunziata of Palermo.

This intermediate work is, at first glance, very much like the one of Palermo. A young woman with an oval face framed by a blue veil, after being interrupted from her prayerful reading, looks up towards her intruder.

As in this intermediate version of the Annunciation, in L'Annunziata of Palazzo Abatellis, Antonello compresses the field of vision and limits the subject matter depicted, but then, in this, his last major work, he exceeds himself by flaunting his ability to tell, with a very limited subject matter and with just a small wood panel (only about one half of a square meter), the whole story of God's Messenger appearing to the Virgin of Nazareth, their conversation, and the Virgin's response.

The L'Annunziata of Palazzo Abatellis in Palermo, Antonello's last major work and last depiction of the Annunciation, despite his compression and limitation of his subject and of his painting space, Antonello provides a narrative of the principal elements of the very well known story of the Annunciation. More than a snapshot, this painting combines events dispersed throughout time. Those events are causally related in objective reality and in history. They are much more than the impressions or sentiments provoked in the viewing subject. Those impressions and sentiments are dependent upon an understanding of the full meaning of this painting, and, in final analysis, faith in the Christian doctrine of the story of salvation. Therefore, for the observer to understand this painting according to the intentio autoris, he must transcend the first impression of a snapshot or photogram and perceive the deeper meaning, even the whole story, in its carefully articulated temporal moments.

At least four distinct times are present in this painting: 1) first a prelude, 2) second the Angel's entry and Mary's initial reaction, 3) third, the Angel's message and Mary's questioning, and 4) fourth, once the Angel has described how God's plan is to come to be, Mary's culminating response. These four distinct times are concentrated in the following pictorial elements: first, the open book, second, her right hand, third, her left hand, and fourth, her serene, confident, and regal gaze. All four temporal moments and the import of the entire narrative are gathered together by the position of the open book.

First the prelude, the painting points to a time prior to itself. The Virgin Mary had been reading from the book opened in front of her.

What book is it? Antonello made sure that it would be clear that the pages in front of her are inscribed with text. But somehow, he made that text entirely illegible. It is up to the viewer to decide. My hypothesis is that Antonello was thinking of Isaiah Chapter 7, the prophecy of the redeemer who would be born of a virgin. "Therefore the Lord himself will give you this sign: the virgin shall be with child, and bear a son, and shall name him Emmanuel.“   (Is. 7, 14)

Second, the right hand of the Virgin with its palm extended forward represents Mary's initial reaction to the entry of the Archangel

The Vulgate translation of the Gospel of Luke, well-known by Antonello, asserts: " Et ingressus angelus ad eam dixit: Ave gratia plena: Dominus tecum: benedicta tu in mulieribus. Quae cum audisset, turbata est in sermone eius, et cogitabat qualis esset ista salutatio. "(Lk 1, 28-29). Mary is surprised and troubled by the intrusion of Gabriel and his unexpected greeting. She, therefore, extends her right hand in self-defense. Note that since the troubled and defensive expression of her right hand does not at all coincide with her serene gaze, the emotive dissonance of these two elements, her right hand and her eyes, must be meant to express two distinct times.

Third, the gesture of Mary's left hand contains two distinct temporal moments. A zoomed detail of the painting helps to make out the double meaning of her gesture.

After the Angel has told her not to fear, Gabriel announces. "You will conceive in your womb and bear a Son, he shall be called Son of the Most High." The gesture of Mary's left hand expresses her understanding that she is the woman prophesied by Isaiah in the book in front of her. (Perhaps she realizes that her personal prayer, upon reading Isaiah, has been answered.) Her left hand gathers the meaning from Sacred Scripture and points to herself, to her Heart, with self-understanding, even historical self-understanding. But Antonello communicates even more through the dense imagery of the Virgin's left hand. In addition to pointing to her Heart, the fingers of her hand gather together her veil to chastely cover her breast to graphically indicate the question she then poses to the Angel upon having understand his message. "How can this be since I do not know man?" (Lk, 1, 34: "quomodo fiat istud quoniam virum non cognosco").[2] The third time of this drama therefore compresses two subordinate temporal moments of the story.

These majestic eyes look out with the composure and confidence proper to the Queen she now is. With her gaze, from her new perspective as Mother of God, she now looks down upon the Archangel, because with her eyes she proclaims "ecce ancilla Domini fiat mihi secundum verbum tuum" (Lk 1, 38: "behold the Handmaid of the Lord, be it done unto me according to your word.") Antonello has advanced beyond the need to paint a dove flying down from heaven. From the self-composure of her haunting gaze, We know the Holy Spirit has already come.

For the viewer who looks from afar and in a hurry, her mouth may seem to express something akin to an ironic smirk. But when one contemplates the enigmatic expression from up close and in unison with her eyes, but separate from the posterior time of her hands, one sees that her lips express a sublime, superhuman joy. An ordinary teenage girl might react to this truly fabulous news with an open-mouthed laugh of ecstatic joy. But this Virgin is the Immaculate Conception and, now, the Mother of God. Antonello shows us how Mary's joy is composed by her graceful self-dominion.

There is one last aspect hidden in Antonello's Annunziata: the position of the pages of the book before Mary. It is opened to the crucial passage, perhaps the prophesy of the virgin who would give birth to He who would be called Prince of Peace and Emmanuel (God with us). As Mary lifted herself from the book to meet the divine Messenger, the book remained open but with the pages suspended in mid air, ready to fall forward or back, dependent not upon chance but upon the free will of a teenage Jewish Virgin. The poised pages of the book represent the dramatic character of the moment. All of history, all of creation expectantly waits for her "fiat", so that each of us can find a place within her heroic drama. 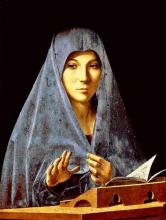