Accompanied with prayers, full of hope that the experience will lead them to an encounter with the Lord of the Harvest and lead them to a deeper communion, better knowledge of the life and apostolate of the Congregation and more mature discernment about their vocation, the 15 Postulants of the St. Matthew Province were officially sent to have their Apostolic Exposure. The simple rite led by Fr. Jessie Martirizar, the Postulant Director, was incorporated in the Eucharistic liturgy presider over by Fr. Herman Abcede, the Provincial Superior, during which the community remembered all Rogationist Missionaries, particularly those in Cameroon, Africa. Within the same liturgy, the community also prayed over Post. Joseph Ho Van Ha and Mrs. Cherry Aquino - a longtime friend and benefactor of the Rogationists, who were both celebrating their birthday. Making October 5, 2018 more memorable at the St. Hannibal Rogate Center, the religious community had a third reason to celebrate - the blessing of the Casa di San Giuseppe and Piazza Maria, witnessed by the daily Mass goers, who ended the festive morning with a meal together.

This mission send-off is made more significant because the month of October is considered the month of the missions. The Postulancy program in St. Matthew Province is done in three phase. Phase 1, called “Enclosure”, is the first four months of the program when the postulants learn the basics of self-knowledge, spiritual discernment, prayer and fraternal communion according to the Rogationist style of life. Phase 2, called “Exposure”, which lasts three months, is the time when the postulants go to have apostolate in various Rogationist communities for two months. In the last month, in December, they go for a month of staying with the family. The last Phase, called “Integration”, is the immediate preparation to the Novitiate. It consists mainly in finding meaning in what they learned in theory and in actual apostolate, and help them discern deeper on their Rogationist vocation. 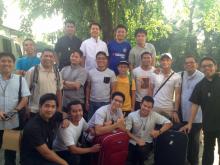 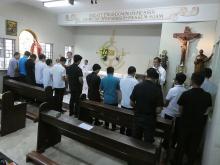 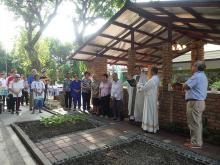