For the Age Group 3-7 Years of Priesthood for Rogationist Priests,

Celibacy - The Way of Living: The Rogationist Identity

The Day of Arrival
While awaiting others' arrival, the rest spent time bonding over a little drink, some songs, a lot of stories and basketball.

The first official day of the Encounter was opened through the morning prayers and the celebration of the sacrifice of the Holy Mass presided over by Msgr. Ramon Masculino, who in his homily spoke of the value of recognizing, enriching and being grateful for one's personal and Rogationist Identity as religious and priests, while living the evangelical Beatitudes. In the session on Chaste Celibacy, the good speaker, commenced by emphasizing what the document Sacerdotalis celibatus itself rightly explained, that “the true, deep reason for dedicated celibacy is… the choice for a closer and more complete relationship with the mystery of Christ and the Church…” This he did by highlighting healthy celibacy and emotional competence (or Affective Maturity), as an integral part of priestly formation and life.
After going deeper in his presentation on Living the Chaste Celibate Life, Msgr. Masculino gave the participants a moment to share in smaller groups their personal insights and experiences, following an examination of self, having been drawn to celibacy and chastity, with motives that have so far kept them embracing the Rogationist religious life despite the challenges and strengthen by the opportunities that goes with it. These inspiring thoughts were integrated in the Assembly, which the facilitator synthesized quoting the document The Gift of Priestly Vocation, “With a proper emotional formation, understood as a journey towards the fullness of love, priestly celibacy will not be viewed so much as something that has to be given up for God as a gift received from his mercy. The one who enters upon this state of life must be aware that he is not assuming a burden but receiving, above all a liberating grace”.

Once more, morning prayers opened the day. The celebration of the Holy Mass, presided over by Fr. Vincent Victor Dumdum, with the fiery homily delivered by the equally impassioned preacher, Fr. King Cena, immediately followed. He emphasized that God, who visited us intervenes for us, in the person of Jesus Christ, who despite our human misgivings, cannot but show us how much he truely loves us.
For the day's sessions, Mrs. Lourdes Migne, deepened on Emotional Intelligence and its components, namely: Self-awareness, Self-regulation, Self motivation, Empathy and Social Skill, and how understanding of these things, complementing all other aspects of their religious and priestly life, can aid the participants know themselves, others and their ministry with grateful acceptance motivated for growth.

With Fr. Gerald Biñegas presiding over the Holy Mass, following the morning prayers, the third day dedicated to a Spiritual Recollection began. Fr. Ricardo Caperiña, in a well-written homily, spoke of the importance of a “name”, which is the theme in all the day’s liturgy that honors the Most Holy Name of Jesus. Fr. Caperiña said that the Name of Jesus is the shortest, easiest and most effective of prayers, through which we can glorify the Father, receive graces from Him and even intercede from souls in purgatory. Speaking of the Encounter, he mentioned how struck he was to hear over and over again the word “wild” to describe this group of participants, which have been a popular impression of persons of their age. He expressed hope, however, that time will come that they will later on be considered not simply as “wild” but as “treasure” – legacy which is worth imitating. He invited the group to dream a good dream – to dream the same dream of St. Hannibal. He also exhorted them to be like useful “virus”, which effectively spread the gospel values. He asked them to be the hope of the institute. Holding hands, wearing smile, he told them to be a welcoming community, despite having to face their own personal vulnerabilities. He even encouraged them to be men for others, especially the poor. Finally, he asked them to be like a lighted candle, consuming itself in its effort to give others light.
During the Recollection at the convent of the Mercedarian Sisters, which was facilitated by Fr. Jessie Martirizar, he deepened on the theme of the recently concluded XII General Chapter and broken down to pieces the significant lessons from it. Entitling his presentation with “Rogationist Charismatic Identity Today”, he focused on making the group realize what makes them true Rogationists. He reminded them the gift of the Rogate from the compassionate Heart of Jesus is the originality and the distinguishing feature of their very consecration as Rogationist religious – that which can define a lifestyle that can help them face the challenges of the present time.
Another highlight of the day is the celebration of the Grand Supplica, presided over by Fr. Dante Quidayan, through which they made special remembrance of all the graces they, their Community, the Circumscription, and the entire Congregation have received through the Most Holy Name of Jesus.
The moments of personal reflection, group-sharing and discussion in the assembly ended with the talk of Dra. Edna Sasing Lao on Healthy Living as Religious and Priests, where she spoke about the stressed life of being in an active ministry and how to cope with stress. She also gave some healthy tips for better and happier apostolic life.

Fr. Edgar Dacaldacal delivered the homily for the fourth day's Holy Mass which wa presided over by Fr. Arlene Gumangan. Fr. Dacaldacal focused on the two values the readings of the day stressed, discipline and respect. He said that discipline can lead to happiness, which in turn can give rise not only to success but more importantly to holiness. Referring to the gospel episode which narrated how Jesus was not accepted in his own place, Fr. Edgar explained that, people tend to like the neighbors of Jesus, who never recognized who he really was because they only saw in him an ordinary man, whose family they knew too well. He, then, spoke of the value of seeing our neighbor beyond their ordinariness, to discover their true identity as children of God, an identity we share with them, which demands and offers respect.
The entire day was spent touring around Bohol's historical and cultural landmarks.

On the fifth and final day, in celebration of the Feast of the Presentation of the Lord and the Day of the Consecrated, Fr. Elmer Dula presided over the Holy Eucharist. Fr. Ariel Tecson, who also led the devotional renewal of commitment of the participants to their religious consecration, cited in his homily two important figures, to missionary confreres, whom he offered them as models of consecration - Fr. Antonio Barbangelo and Fr. Joseph Aveni. He emphasized their apparent difference yet complementary ways of living their Rogationist identity, the former being an example in "action" and the latter being an example in "contemplation". Speaking of their experience in these days, he reminded the participants to treasure having someone to journey with, having confreres, with whom the same consecration and mission are shared, having the Congregation and the Church, constantly offering itself as a loving mother to guide them through everything. Finally, he invited all to cherish this experience like a season of spring giving them hope in everything that they will have to do from then on.

Thankful and will always be, for the warm welcome by our generous and ever hospitable host, the family of Tito Rolly and Dra. Edna Sasing Lao; for the efforts of the organizers, headed by Fr. Ariel Tecson​

​, the Provincial Councilor on Religious Life, Formation and Pastoral Care for Vocations; for the shared wisdom of the outsourced facilitators (Msgr. Ramon Masculino, Mrs. Lourdes Migne, Dra. Edna Sasing Lao and Fr. Jessie Martirizar); for the inclusion of this encounter in the Program of the St. Matthew Province (Fr. Herman Abcede and his Council), and; for the lively participation by all the members of this age-group of priests and religious.

Sending our prayerful greetings to our confreres, who for some reasons dear to their hearts and missions, were not able to make it to be with us in this gathering: Fr. John Youn, Fr. Rey Villamonte, Fr. Jeffrey Jagurin and Fr. Charleston Tumulak. 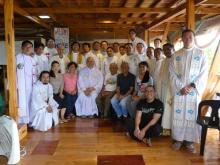 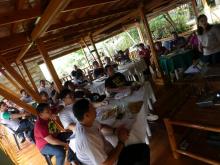 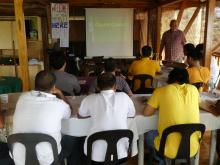