Referring to a lesson from the day’s Gospel Reading, where Jesus healed a blind man by touching his eyes, Fr. Rito Ybanez, RCJ exhorted the participants to the Rogationist Educators’ Workshop 2017 to allow themselves to be touched by Jesus, who himself will lead them in touching other people’s lives through their apostolate. Celebrating his Priestly Ordination Anniversary, while remembering Fr. Jose Maria Ezpeleta who was ordained with him, Fr. Ybañez presided over the Holy Mass, as the first collective activity of the said Workshop.

To officially open the Workshop, Fr. Orville Cajigal, RCJ, the Provincial Councilor on the Sector on Charity and Mission, under whose care this initiative falls, presented Fr. John Joffer Lucas, [the Provincial Vicar and Councilor in charge of the Sector on the Rogate, Laity, Youth and Parishes] to deliver his introductory talk on the Rogationist Identity: Prayer and Charity. In his presentation, Fr. Lucas emphasized how important it is to know, to nurture and to be faithful to one’s identity being a “Rogationist” Educator, if one wants fulfillment in what he/she does. He elaborated on this by making a clear analysis of the value of the Rogate Pericopes – the biblical episodes where the Divine Command of Jesus was proclaimed. To deepen on the subject, he highlighted as well significant events in the life of the Father Founder, St. Hannibal Mary Di Francia, where both Prayer and Charity, were inseparably the core. Fr. Lucas even synthesized the central theme of the “Charismatic Identity” in the Rogationist Literature, particularly the Constitutions. To stress further his point, he quoted certain portions of the homily delivered by Pope John Paul II, of holy memories, during the canonization of the saintly Founder saying that it is his hope “that the example of Fr. Hannibal Mary Di Francia will guide and sustain [such] pastoral work even in our times”. To conclude, he reminded the participants of their precious “call to be faithful and creative, call to perseverance on the path to holiness and call to pursue competence in personal work and to develop a dynamic fidelity to their mission”. As he enumerated the most obvious of countless challenges they are to face, he finally reiterated the very invitation he threw the participants when he started his talk, “it is in this context that we are called to respond in fidelity and with creativity.

Fr. Ricardo Caperiña, RCJ led the prayer to open the afternoon session, which was promptly succeeded by an icebreaker activity, where the participants were asked to introduce themselves to the assembly. Right after, Fr. Cajigal, took the opportunity to present the primary objective of the Workshop, saying that in an effort to produce as output a Directory to guide the Association of the Rogationist Catholic Educational Communities in the Philippines, the results of the First National Congress of Rogationist Educators and Seminaries on February 13-16, 2014 and of the First International Congress on Education May 1-4, 2014 shall be presented as bases.

After his intervention, Fr. Cajigal introduced Fr. Dexter Prudenciano, RCJ, the former Provincial Councilor who headed the above-mentioned National Congress, to present what the sector on Education of the St. Matthew Province have accomplished so far after the first gathering of its educators. Following the comments, suggestions and clarifications, regarding Fr. Prudenciano’s report, Fr. Viktor Emmanuel Aurellana, RCJ, wanting to supplement it, asked that he be given the floor to present the previously approved Philosophy, Vision-Mission Statement and Core Values of what would become an Association of Rogationist Educational Communities. He even presented the proposed name of the Association and its Preamble, to which he freely integrated some concepts introduced by the Philippine Catholic School Standards (PCSS), whose approval he then sought from the assembly.

Having been confronted by the document of the PCSS, which admittedly has and will have relevant implications to the Directory the assembly hopes to produce, Fr. Orville first consulted some members of the group for ideas on how to reorganize the activities during the workshop. Upon hearing further proposals and elucidations, it was decided that discussions by smaller groups be done on how to integrate the document of the PCSS with the working document of the Workshop, taking into consideration the use of terminologies more appropriate for papers produced for/by Catholic Schools, while paying equal attention to certain aspects of both documents’ framework which may already be merge given the very limited time. The fruit of the groups’ discussions shall, then, be presented to the assembly for everyone’s scrutiny and its improvement.

“The Gospel shows Jesus’ passion for life, renewal and continuous improvement. Out of his passion arises his dream for each person. As educators, let us share this passion and help the children under our care to realize God’s dream for them.” This words summarizes Fr. Enrique Raveza III’s homily, in the Holy Mass he himself presided over. The morning liturgy opened the new day for the participants to the Rogationist Educators’ Workshop 2017.

After the prayer, Fr. Orville Cajigal facilitated a brief discussion on how they prefer to proceed with the tasks of the day. It was decided that each group present first to the assembly what they have accomplished the previous day, so the other members may give their observations and insights which may still be incorporated in their earlier work. Here is the sequence trailed by the groups in presenting their respective accomplishments on the following main domains: Faculty and Staff Development, Leadership, Management, Administration, Community Extension Program and Finance.

Afternoon Session (Continuation of the Assembly presentation of the Groups’ Work; then, back to Group Work)

Fr. Elmer Dula, RCJ led the prayer to open the afternoon session. Bro. Francis Ferruci Cayao was tasked to facilitate the presentation of the Rogationist School Identity, covering the matters regarding its Name, Preamble, Philosophy, Vision-Mission Statement and Core Values laid down in a uniform matrix used by the other groups, where Areas of Development, Goals, Key Result Areas, Key Performance Indicators, Strategies and others were enumerated.

In an attempt on initial compliance with the framework introduced by the Philippine Catholic Schools Standards, two new domains shall also be taken into consideration, namely, Learners’ Development and Learning Environment, the details of which shall soon be formulated.

The later part of the afternoon was spent in group works, focusing on the examination of the matrix prepared for the Faculty and Staff Development and on consolidating the proposals enunciated by the members of the assembly on each group’s specific domain of interest.

Together, the participants offered their day’s labor in prayer, by reciting the holy rosary.

Drawing inspiration from the reading of the day’s liturgy, Fr. Herman Abcede, RCJ, the Provincial Superior, who presided over the Holy Mass, expressed hope that over and above all the fruits of the efforts of the participants of the Rogationist Educator’s Workshop 2017 striving to unite the life and works of all the educational institutions which they serve, they will still find God’s grace as the only source of true unity. He also exhorted them to stay humble in their service, for solely through this virtue can they bring themselves to heed Jesus’ call to deny themselves, carry their cross and follow him in all they do.

The prayer led by Fr. Wesley Jay Taguibao, RCJ opened the morning sessions. For the second and final time, the groups presented to the assembly how they have merged the suggestions from the other members of the entire group into their earlier work. The refined matrix from each group shall be forwarded to the Secretariat for the drafting of the Directory of the Association of the Rogationist Catholic Educational Communities in the Philippines.

Fr. Orville Cajigal, RCJ facilitated the evaluation of the entire proceedings of the Workshop. Following the work, its fruits were accepted and approved by the assembly. Then, nominations by secret ballots were made to be presented for the Provincial Council’s consideration, as regards the appointment of a Superintendent of the Association and an Executive Council to assist him.

Proposals regarding the upcoming activities were brought forward.

Certificates of Participation were also given.

Fr. Orville, in his Closing Remarks, expressed his appreciation for everyone’s active participation in the entire affair and wished for their continued and constant collaboration in the years to come.

Special thanks to the generous assistance of Bro. John Francis Aberion and Bro. Francis Ferruci Cayao, in coordination with Bro. Eduardo De Palma!

Sincere gratitude for the warm welcome and hospitality of the management and staff of the Oasis of Prayer! 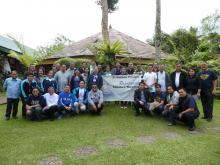 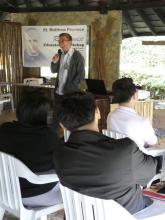 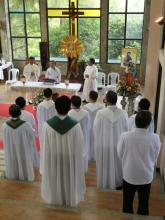 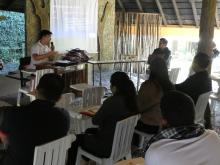 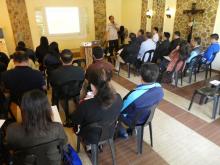