Turn Over of Office of the Superior of the St. Hannibal Rogate Center

During the morning Eucharistic celebration, presided over by Fr. Alex Clemente, Fr. Orville Cajigal, the Provincial Superior, led the Rite of Turn Over of Office of the Superior of the religious community. Fr. Jessie Martirizar, by handing over to Fr. Clemente the symbols of authority, turned over to him as well the task being the Superior of the St. Hannibal Rogate Center, which Fr. Cajigal confirmed. Each, the outgoing and the incoming Superior, in front of God and his people, said his prayer of thanksgiving and prayer of acceptance and commitment, respectively. In the same morning of June 12, 2019, the House Council, in the presence of the Provincial Superior, was held, during which Fr. Martirizar reported to Fr. Clemente the current status of the religious community and its members. May those in-charge of the service of authority be granted wisdom of the mind, compassion of the heart and generosity of hands! 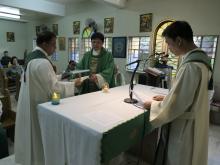