Workshop on the Manual of the Charitable Institutions of the St. Matthew Province

It started with a recollection where Rev. Fr. Jessie Martirizar, the Postulant Director of the Province, talked about the two icons of the ROGATE and its embodiment in the Charitable Institutions of the St. Matthew Province.  It was followed by a moment of reflection and prayer.  In the afternoon of February 6, 2018, Fr. Orville R. Cajigal provided a backgrounder and gave instructions about the activities to follow. They were divided into two groups with particular works to do.

The next day, February 7, 2018, each group presented their work.  There was a moment of sharing among the participants regarding varied concerns which may be helpful in drafting of the Manual.  They, then, had the evaluation of the entire workshop to conclude their work. 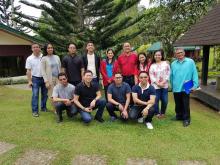