It’s been almost a year now since we launched the supplementary flyer, especially tailored for offline “Friends of Father Joseph Aveni”, in view of spreading the knowledge of his virtuous life as a Rogationist religious and priest. As he himself admitted, his life was spent entirely within the Rogationist communities. All his moments were punctuated by the daily schedule; his existence had been without any particular unraveling; he neither had benefited from fleeting popularity nor enjoyed extensive, multiple and
intricate acquaintances. Yet, his exemplary life has conquered the hearts of the simple and all those who have had the opportunity to encounter him, Confreres, priests, religious men and women, seminarians, aspirants as well as numerous lay faithful, particularly during spiritual direction. Even those who just met him occasionally have preserved a high esteem and see in him a commendable person of reference as guide in their spiritual journey. For this he was considered by all as the Father
Master par excellence, a true master of the spirit. (Cf. Testimony of Fr. G. Ciutti)
On this issue for the month of December, we have indeed a lot of significant events to remember. December 5 marks the 98th Birthday of Fr. Aveni. Then, after 3 days, comes the Feast of the Immaculate Concepcion, the same day of his baptism. And, as we are nearing Christmas Day, Jesus’ Birthday, we cannot but recall another important event in which Fr. Aveni would never miss gracing with his most loving presence: the annual “Christmas Sharing” organized by the Seminary community for poor children. What a beautiful memory to recall, when after receiving a load of gifts, children would run to the place where Fr. Aveni patiently waits with a smile, ready to extend the Baby Jesus in his arms for each kid to kiss. For seven years now since he left us (2010), we have been celebrating Christmas without Fr. Aveni, yet his memory still remains, in the minds and hearts of his beloved children. 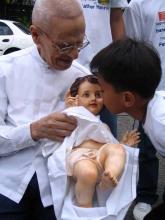