Thanksgiving Masses of the New Priests from the St. Matthew Province

After their Priestly Ordination at the Our Lady of the Most Holy Rosary Parish in Multinational Village, Parañaque City, on November 26, 2016, in a liturgy presided over by Most Rev. Socrates Villegas, DD, the Archbishop of Ligayen-Dagupan, the five new priests from the St. Matthew Province held their Thanksgiving Mass in their respective native places. On November 30, 2016, Fr. Francisco Gringo Tagabi, celebrated his first Mass in Baggao, Cagayan, while Fr. Sherwin Valenzuela, presided over the Holy Eucharist for the first time in M'lang, North Cotabato on December 4, 2016. Carrascal, Surigao del Sur, witnessed and were blessed by one of its native sons, Fr. Welbert Llyd Suarez, in his first Holy Mass with them on December 8, 2016. Fr. Jessel Bangoy, on the other hand, presided over his first Eucharistic liturgy in Aras-asan, Surigao del Sur on December 10, 2016, and finally, on December 11, 2016, San Juan, Ilocos Sur proudly and prayerfully participated in the Thanksgiving Mass of Fr. Tristan Angelo Tagabi. Surrounded by confreres, family and friends, the new ministers of the Sacred Order offered their Sacrifice filled with gratitude on the holy Altars of the churches, where they first received faith. Let us continue to pray for these laborers, that God may continually make them holy as they serve Him in his vast vineyard! 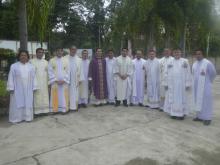 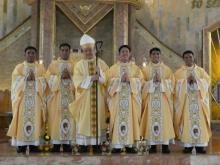 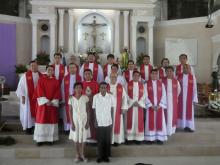 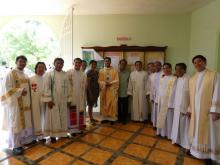 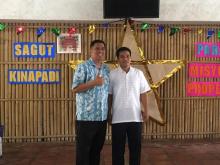