FIRST PROFESSION AND ADMISSION TO THE NOVITIATE

The Novitiate proudly presented 8 Novices, who made their first Religious Profession, to the Philippine Quasi Province. During the same Eucharistic sacrifice celebrated in SABV - Silang, Cavite on the 31st of May, 19 Postulants were welcomed by their Master as they officially begun their year-long ‘Spiritual Retreat’ at the Novitiate. Fr. Herman Abcede, the Provincial Superior, presided over the Holy Mass for the entrance to the novitiate and the first profession. Rogationist priests from other communities as well as priests from other congregation and dioceses came to concelebrate. 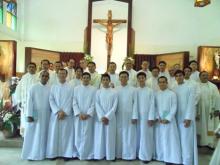 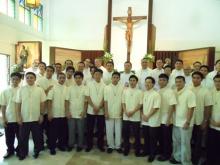