A back to back ordination

A shower of blessings! Two grace-filled events happened in the Philippine Quasi Province. A back to back ordinations in just two consecutive saturdays. On October 19 and 26, 2013 Fr. Santos Solitario and Fr. Ronie Gumagay were ordained to the order of priesthood respectively. The double events were extraordinary due to the immensity of the gifts, the participation of the people and the solemnity of the liturgy.

FR. SANTOS SOLITARIO was ordained last October 19, 2013 in the parish of the Sacred Heart of Jesus, in Tangkong, Batayan, Cebu. The event started at 9:30 in the morning with His Excellency Most Rev. Emilio Bataclan, the auxiliary bishop of Cebu, as the ordaining prelate. The event was such an extraordinary one for the “ordinandus” and for the parishioners of the parish. The immense Church (under construction) of the parish which has the capacity of more than 2000 people was filled with so much people counting more or less 3000 individuals. The liturgy was solemn and had been done under the great care by the religious of the Fr. Di Francia Center of Studies. More than 20 priests, coming from various communities of the province and from various parishes nearby, attended and concelebrated.  After the rites of ordination, a bountiful lunch was offered to everybody. It was amazing to see everybody filled with joy and grateful for the gift of priesthood.  At 3:00 o’clock in the afternoon Fr. Santos had his first thanksgiving mass. Several priests who participated in the ordination were again present in the said first mass. Fr. King Cena was tasked to give the homily during the mass. His homily centered on the need to pray for vocations and the need to pray for the newly ordained priest, Fr. Santos Solitario. Before the mass ended, Fr. Santos had his chance to thank everybody for the prayers, assistance and for the presence on this wonderful occasion in his life, the ordination to the priesthood. Again, after the said mass, a dinner was served for everybody. While having dinner a program was offered in honor of the new priest. Dances, songs, speeches, trivias, and cultural presentations were the contents of the program. The singing rendition of the parish priest added color to the program and the thank you speech of Fr. Santos Solitario highlighted the said activity. Fr. Solitario was inspired by the passage from the letter of Paul to the Corinthians saying “my grace is sufficient for you, for my power is made perfect in weakness.” (1 Cor 12:9)

FR. RONIE GUMAGAY, another rogationist religious, was ordained a week after, on October 26, 2013 in the parish of the Immaculate Conception, Oslob, Cebu. The ordination happened in the afternoon with His Excellence Most Rev. Julito Cortes DD, bishop elect of Dumaguete, as the ordaining prelate.  Several priests from the Rogationist communities, from other congregations and from the diocese came to concelebrate. Just as the ordination of Fr. Santos was such a successful event even this ordination of Fr. Ronie was equally a great success. In the homily, Most Rev. Julito Cortes DD considered the importance of the gift of priesthood. Fr. Herman Abcede, Provincial of the Philippine Quasi Province gave to the parents of Fr. Ronie the Papal blessing and to the parish priest the statue of St. Hannibal Mary Di Francia. After the ordination a bountiful dinner was prepared for everybody in the town plaza. A wonderful program was also organized to entertain the people. In the following morning at 8:00 the Thanksgiving Mass was offered by the new priest in the same parish Church. Fr. Eric Raveza gave an inspiring homily to highlight the gift of priesthood. The event was participated by the people and some friends and benefactors. Fr. Ronie expressed his conviction that connection with Christ as he quoted the verse from St. John: “I am the vine you are the branches. Whoever remains in me and I in him will bear much fruit, because without me you can do nothing.” 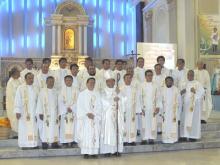 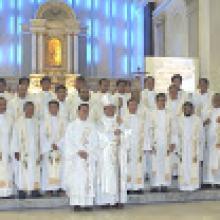 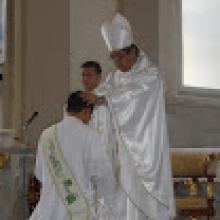 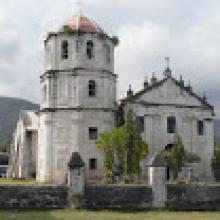 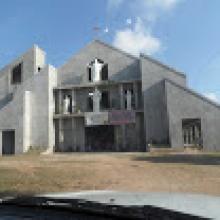 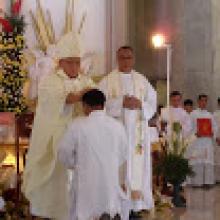 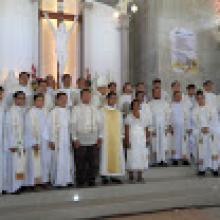 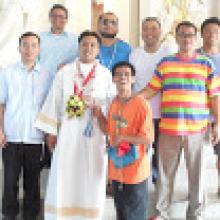