Maumere, Indonesia – In the celebration of the Holy Mass, Bro. Henrikus Gualbertus, the first Indonesian Rogationist religious renews his vows through the hands of Rev. Fr. Herman Abcede, RCJ, Major Superior of the Philippine Delegation last September 6, 2011 in the chapel of the Daughters of Divine Zeal in Kota Uneng, Maumere. The Mass was presided by Rev. Fr. Herbert Magbuo, who just celebrated his first Priestly Anniversary and concelebrated by Frs. Eric Raveza, John Lucas, Breynard Peji, and Wesley Jay Taguibao. Together with the renewal of vows, ten new seminarians were formally accepted to the aspirancy. The said occasion was graced by the presence of the Daughters of Divine Zeal, relatives, friends and benefactors of the Religious community. 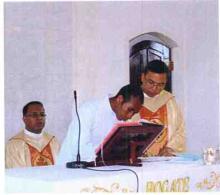