Institution to the Ministries of Lector and Acolyte

SUCAT, Paranaque City – On the Feast of the Birth of the Blessed Virgin Mary, the Province witnessed the Institution to the Ministries of 9 Lectors and 13 Acolytes, held at Father Di Francia Center of Studies in a concelebrated Mass in the evening presided by the Provincial Superior, Fr. Herman Abcede, RCJ. Religious, Postulants, Aspirants, friends, relatives and benefactors joined the celebration.

In his homily, Fr. Herman reflected on two major reasons to rejoice: the Birth of Mary, and the Institution to the Ministries of Acolytate and Lectorate. Focusing on the importance of grace, he reflected on the precious gifts which the People of God received from the Lord. “The birth of Mary”, he said, “is a pure grace from the Lord; she is the dawn of our salvation – and precisely the reason why we have to rejoice!”

Turning to the Lectors, Fr. Herman urged them towards their untiring commitment to proclaim the living Word of God in every liturgical celebration, where the People of God gather to celebrate the faith. He invited them, with the solicitous efforts of the Formators, to meditate, practice and live the Word of God in their daily lives.

As to the Acolytes, Fr. Herman invited them to live the Eucharist as they serve and assist in the liturgical celebration, while not neglecting also the meditation and practice of the proclamation of the Word of God which they also received as a ministry before.

To both, he concluded with the invitation to consider their ministry as “service” to God and to the People of God.

Eventually, the usual liturgical celebration followed. Before the Holy Mass ended, a short video was presented before the assembly which depicted the Rogationists’ presence in Indonesia. This was done in view of the Rogationist Mission day dedicated for the establishment of the seminary in Indonesia.

After the Holy Mass, a simple dinner was shared by everybody. 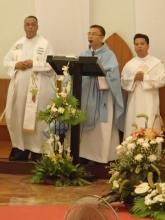 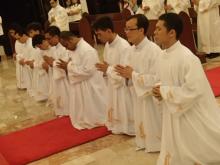 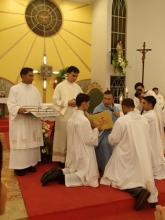 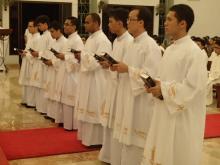 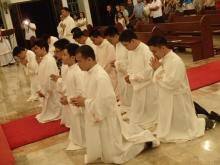 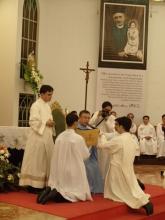 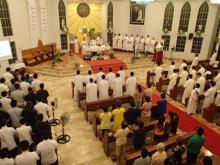 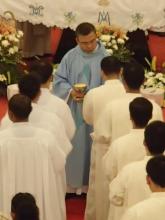 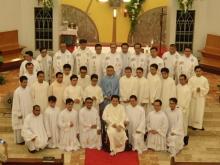