The Jubilee Year of the World Day of Prayer for Vocations

“Vocations: Signs of Hope Founded in Faith” - In anticipation of the forthcoming “Good Shepherd Sunday”, the Family of the Rogate, together with priests, families, youth and religious congregations, organized and celebrated a day for the Jubilee Year of the World Day of Prayer for Vocations last Saturday, April 20, 2013 at St. Anthony’s Boys Village-Rogationist College, Silang, Cavite, with the theme: “Vocations: Signs of Hope Founded in Faith”.

With almost 2,000 participants who attended the celebration, the event was marked with animations, catechesis, Holy Mass and Adorations, group sharing and cultural presentations which showcased the 50 years of the Church’s mandate in inviting everyone around the world to pray and work for holy vocations. Fr. Miguel De Silva’s Rogate Family Song became the official song and animation for the celebration which was performed by the Rogationist seminarians and postulants.

Bishop Mylo Hubert Vergara of the Diocese of Pasig gave a catechesis on vocations. He emphasized Pope-Emeritus Benedict XVI’s message on the 50th World Day of Prayer for Vocations which centered on hope. “To have hope”, he said, “is happiness, offering, peace and Eucharist”. Without these, it would be impossible to appreciate the gift of vocations which the Lord himself initiated among whom He chooses – the call to single-blessedness, married life and priestly and religious life.

Together with concelebrating priests, Bishop Mylo presided the Holy Mass. In his homily, he emphasized that to pray for vocations is not only to pray for others but also to pray for one’s vocation too. The usual liturgical celebration followed, and then towards the end of the Holy Mass, a prayer composed by Blessed John Paul II was said. The Choir of St. Hannibal Empowerment Center animated the songs in the Holy Mass.

After the lunch, Breakthrough Circles took place. On that part, 50 groups were distributed into different areas in the school campus to have their group dynamics. The group dynamics featured various youth groups who performed various role-play of different Biblical personages note-worthy of their vocation story. This became the focus of the group sharing, which later on became the material of their resolutions through “tongues of fire” made into a collage onto a bigger “tongue of fire” then put into the “Galilee Wall”. Prayers of commitment were composed in the official poster of the event which was offered in the concluding “Tribute to Our Lady of Vocations”. All casts of the role-play concluded the dynamics with a prayer-dance of the song “Many Gifts, One Spirit”.

Eucharistic Adoration was presided by Fr. Herman Abcede, RCJ, Provincial Superior of the Rogationists in the Philippines. In his sharing, Fr. Herman gave his own version of as response to Bishop Mylo’s catechesis: “H - Hear the heartbeat of Christ, O - Observe the overflowing harvest, P - Pray passionately for the harvest, and E - Encounter the Lord with Enthusiasm”. Intercessory prayers were said before the final blessing.

Cultural presentations featured performances from St. Anthony’s Boys Village-Rogationist Academy from Davao, songs from Accapella Manila, an interpretative dance from the community of St. Hannibal Empowerment Center, and a Marian song from the selected religious brothers from the community of Father Di Francia Center of Studies. The brothers too carried the statue of Our Lady of Vocations towards the center platform accompanied by the prayer-dance of the youth of SHEC.

As soon as the statue of the Blessed Mother was placed, prayers and salutations were said, and then representatives from each group came to offer the commitment prayers. The celebration ended with the theme song “Rogate Family Song”. By:  Post. John Francis C. Aberion 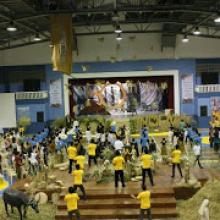 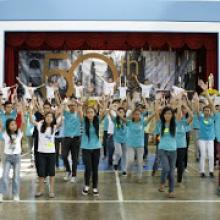 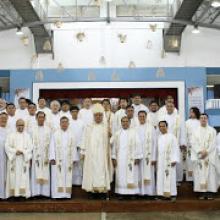 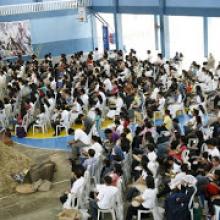 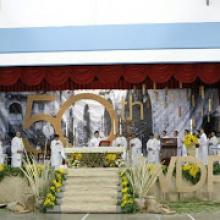 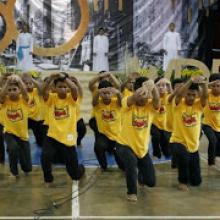 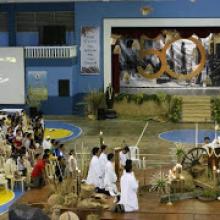 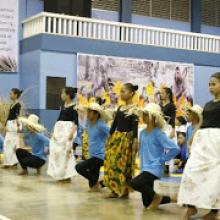 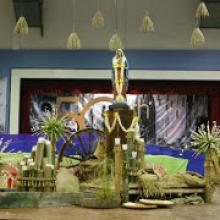 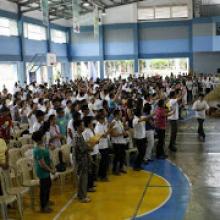