Fr. Francesco Bruno, the general counselor  for Rogate had a meeting with all the religious of the Quasi province on the theme; “Rogate and New evangelization”. All the priests and religious of the Aluva zone took part in the meeting . There was a similar meeting two days back the same meeting was held for the communities of the Manthavadi zone in Gurudarshan Rogationist novitative. Fr. Bruno gave a substantial and scientific reflection on the mentioned topic explaining the theoretical and practical implications of Rogate and New Evangelization in the life of a Rogationist religious. After the exposition of the topic there was time for sharing and reaction about the topic. Fr. Bruno exhorted the rogationists to have the fire of Rogate in our heart inorder for us to be a true Rogationists giving revelation and bringing salvation to the abandoned crowed of the Inidian society and the world.

Aluva:On November 12, 2012, Fr. Devassy Painadath left for USA to assume his new assignment as a Rogationist Missionary in the States. In the last months Fr. Devassy was in the Quasi Province House Aluva, preparing himself for the new assignment. On 10th of November Quasi Province Community organized a farewell party for him. Many close friends and benefactors were invited for the same. In his farewell message, he underlined the importance of the necessity of missions and assured the Quasi Province of his spiritual and material help. On the day of his departure, Fr. Devassy presided over the Eucharistic Celebration with the community of the QP and he thanked all the confreres for their accompaniment. We extent our congratulations, best wishes and the continuous support for his generosity and willingness for the new mission in USA. 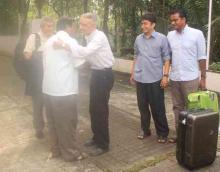