Dear Conferrers,  Today was a marvelous and gracious day (January 14, 2015) for the Church in Srilanka. His Holiness Pope Francis canonized Blessed Joseph Vaz at Galle Face, Colombo and decreed to venerate  him as the saint in the universal Church.

St. Joseph Vaz was born at Benaulim, Goa, India in 1651 and was ordained a priest of the Archdiocese of Goa in 1676. Fr. Vaz, on hearing of the plight of the Catholics in Ceylon, under the dutch persecution, came over disguised as an ordinary laborer in 1687 and worked for 24 years in and around the area of Kandy and died there in 1711. Pope John paul II beatified him in 1995 when he visited Srilanka. Today he was raised to the altars of Saints as pride of Goa and saint of Lanka. Let us thank the Lord for his manifold blessings and invoke the intercession of St. Joseph Vaz for a progressive, peaceful and powerful witnessing Church in Srilanka. See the photos attached..thanks.. 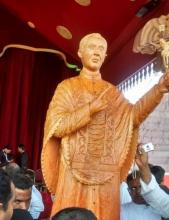 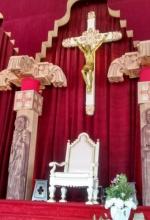