Sending off of Bro. Tome June and Bro. Jorem for Papua

On August 8, 2013 Thursday, the Father Di Francia Center of Studies Community sends off their two confreres with a prayerful wishes and a bagful of smiles. To highlight the activity at 6 o’clock in the evening, a solemn Mass was offered begging the Lord of the Harvest to guide and protect the new missionaries: Bro.Tom June Lancin RCJ and Bro. Jorem Bellen RCJ to Papua New Guinea. Fr. Herman Abcede, provincial, presided over the holy Eucharist together with Frs. Elmer, Ranny, John, and Bong. They invoked the Holy Spirit for the grace of perseverance and total dedication. In his homily, Fr. Herman shared his own unrealized dream and desire to be a missionary; a reason for calling himself a missionary at home. Taking a short moment to give some details of his own story, he then went directly to the point by inviting Bro. Tom June and bro. Jorem to proclaim and announce the very same Jesus that they encountered in their prayer and reflection. He challenged them to be strong in their commitment and to keep the flame of simplicity forever burning. Going a bit deeper, he read the “would be” message of Pope Francis to the missionaries in this forthcoming World Mission Sunday. He gave particular stressed on being rooted on the faith in Christ and to generously offer their undivided heart to him. Wrapping up his message, he recalled his all-time favorite story of the “Chicken and the Baboy”.

Immediately after his homily, a short rite of blessings was prayed over to the missionaries; with eyes casted on the ground the missionaries then approached the celebrant to receive the crucifix. After the Solemn mass a short and simple program followed. Presentations from the postulants, religious students and from the missionaries themselves were showcased while the hungry crowds were all busy sharing the food prepared by the community. Series of messages were then expressed by confreres and formators alike. They assured Tom and Jorem of their constant prayers and wished them all the best for their mission. Putting the program to its end, the community one heartedly offered a song entitled The Mission. Finally, with joy in his heart the Provincial extended his hands asked the Lord for His grace and parted his final blessings. 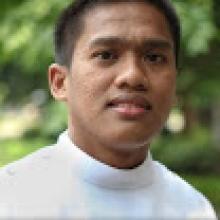