Courtesy visit to Card. Advincula of the Archdiocese of Manila

(Oct. 24) Cardinal Jose Advincula of the Archdiocese of Manila received the Rogationist delegation for a courtesy visit and a dialogue. The Rogationists were composed of the General Officials, namely: Fr. Bruno Rampazzo, Fr. Jose Maria Ezpeleta and Fr. Brizio Giovanni Greco; as well as the newly re-elected St. Matthew Province Superior, Fr. Orville Cajigal and the Provincial Councilor for Parishes, Fr. John Lucas. Present, too, were the confreres assigned at the St. Hannibal Empowerment Center (SHEC) in Pasay City, which belongs to the Archdiocese of Manila: Fr. Arlene Gumangan, Fr. Dexter Prudenciano, and Fr. Antonio Dammay.

The main purpose of the meeting was to greet the Cardinal and to present the new Provincial Superior and the new Councilor for the sector of parishes. Another topic on the agenda is the proposal of the Cardinal to entrust to the Rogationist a parish in the Archdiocese at Maricaban, Pasay where our Rogationist community is inserted among the poor of the city. In this way, the Rogationists can better express their apostolate of charity and the pastoral care of the faithful in the territory. The Cardinal expressed his appreciation for the work of the Rogationists in his Archdiocese and the offering of a parish is seen by him as a means of consolidating our apostolate and pastoral care. For a long time, there had been no new Religious Congregations to whom a parish has been entrusted and the Rogationists is the latest one to receive such an offer. The Presbyteral Council has been consulted and did not oppose the proposal. Upon the request of the Provincial, Fr. Orville Cajigal, the Superior General authorized the acceptance of the parish in principle. The formal turn-over and the installation of the parish priest will be established after defining the terms of the memorandum of agreement between St. Matthew Province and the Archdiocese of Manila. This new parish will be in close collaboration with the Rogationist Community of Pasay. The parish priest will be one of its community members. 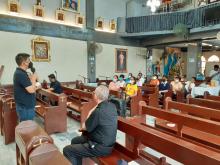 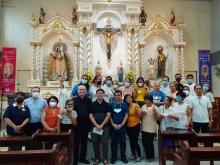