Encounter of the Religious in Practical Training 2017

Organized by Fr. Ariel Tecson, the Provincial Councilor for the sector on Religious Life, Formation and Pastoral Care for Vocations, the annual encounter of the Religious in Practical Training of the St. Matthew Province commenced, with the blessing of the Provincial Superior, Fr. Herman Abcede.

This year's event, with the theme "Oramus et Servimus: Communion in Communities", set in Ilocos Norte on October 6-11, 2017, was participated in by 21 of the 25 practical trainees of the Province.

After 17 hours on the road from the Fr. Hannibal Formation Center in Parañaque City, with side trips to Luna, La Union - where the group visited a friend, and celebrated the Holy Mass at the St. Catherine of Alexandria Parish (Shrine of Our Lady of Namacpacan) - and to the St. Augustine Parish in Bantay, Ilocos Sur (home of the Nuestra Señora de Caridad, Patroness and Queen of Ilocandia), the group arrived at the St. Lawrence, the Deacon Parish in Bangui, Ilocos Norte, where Fr. Silvestre Robiñol, Fr. Tristan Angelo Palado and Fr. Tirso Alcover, Jr. warmly welcomed and accommodated them.

As an integral part of the entire Encounter of the Religious in Practical Training, the brothers had an opportunity to listen to Fr. Silvestre Robiñol, who himself presided over the Eucharistic celebration that opened the second day. With Fr. Ariel concelebrating, Fr. Robiñol spoke to them about the grace given to the Rogationists to administer parishes, such as the St. Lawrence, the Deacon Parish, were countless creative expressions of the charism animates the faithful. Being a day dedicated Our Lady of the Most Holy Rosary, he added some insights on the beauty of the mysteries of prayer handed on by the Blessed Lady to her sons. Then, highlighting one of the messages she left when she appeared in Fatima, Fr. Robiñol exhorted them to constantly embrace conversion, which enriches religious life and ministry. Finally, he invited them to always be appreciative of God's graces, which come in a special way, through the Holy Spirit's guidance as communion is lived while the mission is accomplished at the same time.

From the Parish, the group started their day trips reciting the Morning Prayers as they roll along.

This very day, the confreres remembered in prayers the 4th Death Anniversary of Bro. Herman Yoseni, an Indonesian religious who died as a practical trainee. Bro. Silvester Yohanes Kenedy shared some personal encounters with Bro. Yoseni, a close friend whom he even assisted in his final hours.

Due, however, to heavy rain fall, the visit to Kabigan Falls in Balaoi, Pagudpog was called off. They proceeded instead to see the famous Patapat Viaduct - a 1.3km concrete coastal bridge that connects the Maharlika Highway from Ilocos Region to Cagayan Valley. From there, they just passed shortly to see and hear some stories about the mythical "Paraiso ni Anton" - a place, accordingly, a man named Anton never left with his prayers unanswered. The water from its natural spring is also believed to have some healing powers. Just opposite it, hidden in what is now densely forested area due to neglect, are the ruins of the what used to be one of Marcos' mansion.

Not letting the continuous downpour spoil the day's plan, the group proceeded to Hannah's Beach Resort and Convention Center, where a series of team building activities, including swimming, awaited them. Thanks to Ret. Col. Ricardo Nolasco, Jr. for generously accommodating the confreres in said resort, with a day-long accompaniment and facilitation of Ms. Ezra Ballesteros and her assistant, Ms. Joana.

Early in the morning, the group left Bangui for Barangay Navotas, Laoag City. They had a day of spiritual recollection centered on the “Rogationist Identity: Insights and Challenges Today”, and a series of workshops which highlights “The Joy of Fraternal Life in Community, facilitated by Fr. Jessie Martirizar at the Daughters of Divine Zeal’s Rogate Oasis (a retreat facility). Thanks to Mo. M. Josefa Quisol, FDZ and community.

Fr. Herman Abcede arrived in the afternoon, from Parañaque City.

“Communion with the Daughters of Divine Zeal”

In the evening, they transferred to the Madre Nazarena Domus in Vintar, Laoag City, where Sr. Eva Marie Briosos, FDZ gave the brothers a brief background about life and ministry of the Daughters of Divine Zeal in the northern part of the Philippines. Then, with Fr. Herman and Fr. Ariel concelebrating, Fr. Jessie presided over the Sunday Mass with the FDZ community, after which the sisters offered a sumptuous dinner for the group. Thanks to Mo. M. Erlinda Huelar, FDZ and community.

Fr. Herman was accommodated at the Madre Nazarena Domus.

The group, then, proceeded to the Shalom Resort of the family of Mrs. Gloria de los Santos, in Barangay Puyupuyan, Pasuquin, Ilocos Norte, where they settled for the rest of the days of the encounter. Thanks as well to the constant assistance of Mr. Al Laurin.

October 9, 2017 “Communion with the Father Provincial”

From the Madre Nazarena Domus in Laoag, Fr. Herman Abcede went to the Shalom Resort in Pasuquin to join the practical trainees for their day-long encounter with him, which commenced with the sacrifice of the Holy Mass he himself presided over, with Fr. Ariel concelebrating.

After delivering a homily centered on the lesson of discovering, appreciating and living one’s mission, he gave the group a conference on being “Shaped for Serving God”, enumerating characteristics typical of real servants. The rest of the morning was spent in personal dialogue with him, while the rest engaged in a creative workshop on “Unmasking One’s Idea of God’s Project for Oneself”, which ironically was expressed by decorating one’s mask that represents such an idea.

The host/owner of the Shalom Resort offered the group a good lunch, after which they rendered them a song and some Rogate Images articles as token of appreciation.

“Communion with the Children”

Late in the afternoon, the group visited the Tahanang Carmela D’Amore in Laoag City, where they were introduced to the apostolate for the children of the Daughters of Divine Zeal. Mo. M. Eustolia Capilitan, FDZ narrated briefly the history and current situation of their community, before serving the group a simple merienda, as the children were presenting a song and a dance number. They were even toured around the house for them to see the facility where they accommodate and educate the children. Thanks to Mo. Capilitan and Community.

“Communion with the Bishop”

The evening was spent at the Bishop’s Residence in Laoag City, where the practical trainees had an audience with Most Rev. Renato Mayugba, DD, the Bishop of the Diocese of Laoag. In his very casual, yet insightful sharing, the good bishop spoke of communion with God, through the sacrament of the Eucharist and of Reconciliation; sacramental communion, expressed in a life lived in unity with one’s superior and among confreres, and; communion, through one’s ministry, which is a call to love even the unlovable. The group was privileged to have shared dinner with the Bishop, after their encounter. Fr. Silvestre Robiñol and Fr. Tristan Angelo Palado were with them during this encounter.

After the Morning Prayers, the group transferred to the Rest House of the family of Mrs. Gloria de los Santos, in Barangay Binsang, Bacarra, Ilocos Norte, where they were given the entire morning to freely organize themselves in activities that included (marketing earlier in the morning) fishing and cooking, apparently ordinary chores, through which they may strengthen communion among themselves. Sr. Josefa Quisol, FDZ was present to teach the brothers how to prepare their improvised fishing rods and how to actually fish with patience.

Fr. Herman joined them later in the morning to continue his personal dialogue with the brothers.

In a very festive mood, the community of Our Lady of the Rogate Convent of the Daughters of Divine Zeal in Vintar, Ilocos Norte, welcomed the group in the afternoon. Assisted by the Sentinels of Rogate (the lay collaborators of the FDZ), they had an opportunity to meet with Ms. Larisa Foronda, the Municipal Mayor of Vintar, before touring the Vintar Dam. From there, they returned to the convent to celebrate the Holy Eucharist, with Fr. Ariel Tecson as the presider. Following the sharing a special dinner prepared by the Sisters and Sentinels, the entire Encounter of the RPT was concluded through a simple program, where each brother explained the meaning of his decorative mask. By group, the brothers performed their thanksgiving piece, before guests that included parish priest of the St. Nicholas de Tolentino Parish and the confreres from Bangui. Thanks to Mo. Evangeline Bastasa, FDZ and the community.

During the Holy Mass early in the morning, which Fr. Ariel presided, he gave the brothers the chance to talk sincerely with each other, particularly to those with whom they are currently working, to express appreciation for each one’s gift of person and to settle some differences – making the sacrifice of the Holy Eucharist be a truly sacrament of communion.

From there, the group started their journey back to Parañaque, from where each will proceed to his own community assignment.

On their way, they took the opportunity to have a very simple pilgrimage to some known Churches in the north and even dropped by some historical/cultural places and a zoo that features exotic animals. They were guided by Fr. Rey Rabebes, one of the resident priests at the Archbishop’s Palace of Nueva Segovia.

Among the churches they visited were the St. William Cathedral of Laoag, the St. Augustine Church of Paoay, the St. John the Baptist Parish (home to the Virgen Milagrosa de Badoc) in Badoc and the St. Augustine Parish Church (home to the Nuestra Señora de Caridad, Patroness and Queen of Ilocandia) in Bantay. They also had the chance to see the Museum of the Archbishop’ Palace in Nueva Segovia, the Ayala Museum in Vigan, the Calle Crisologo also in Vigan. They also paid a short visit to the Baluarte Zoo.

The group had their very late lunch at the family residence of Fr. Arlene Gumangan in Sta. Maria, Ilocos Sur. From There they proceeded straight home, thanking God in prayers for the success of the Encounter of the Religious in Practical Training. 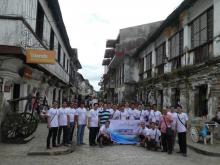 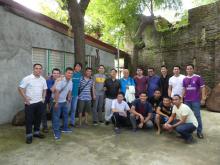 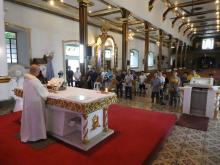 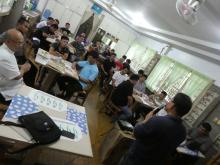 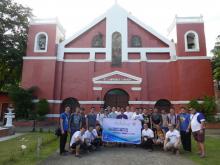 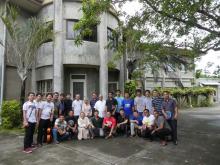 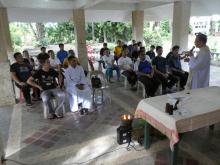 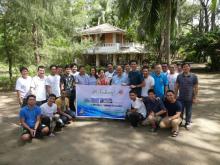