Seminaries of Paranaque and Cebu: Opening of the new school year

The Rogationist Seminary College of Philosophy-Manila officially started the academic year 2022-2023 on July 18, with the Mass of the Holy Spirit at Saint Hannibal Chapel presided by the Dean of Studies, Rev. Fr. Francisco Gringo Tagabi, RCJ. The professors made the profession of faith during the liturgy. After the Mass, the students had an orientation on the institution’s overall program.

Likewise, the Rogationist Seminary College – Cebu officially began the Academic Year 2022-2023 on August 1, with the celebration of the Holy Spirit Mass at the chapel of Saint Hannibal Formation Center Cebu presided by Fr. Dante Quidayan, the Rector of the Seminary.  Incorporated in the celebration was the "Pledge of commitment as Rogationist Educators" of the professors done after the prayer of communion. After the Holy Mass, Fr. Kristian Irvin Taok, Dean of Studies, facilitated the orientation to the academic life of the Seminary. 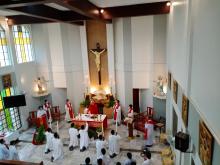 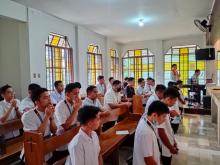