The Rogationist St. Matthew Province has organized a Series Talks on the theme “Communion in Communities”, spread out through the entire year, with the venue at the Oasis of Prayer - Rogationist Spirituality Center in Silang, Cavite.

The first of the series opened on May 7, 2017 during the celebration of the 54th World Day of Prayer for Vocations. Fr. John Lucas opened his reflection by speaking about the obvious individualism creeping through society at large and even in religious communities in particular. Then, in contrast, he introduced the concept of communion as seen in the old testament stories of creation, life Abraham and that of people of Israel - their exile from their native land and their return therefrom. In these narratives, he said, the call for us to be in a community - as we serve God and observe His commandments - is repeatedly stressed. He concluded by leaving the audience, composed mainly of religious from various congregations, members of the Union of Prayer for vocations, and friends, some questions to ponder upon.

Immediately after the talk, the participants had an hour of Eucharistic Adoration for Vocations, presided over by Fr. Jessie Martirizar. Fr. Joel Ricafranca delivered the homily, recounting how struck he was by Pope Francis' reference to every Christian, being a "Christopher" - a bearer of Christ (from the Pontiff's message for current WDPV, with the theme, "Led by the Spirit for Mission"). In his usual lively fervor, he exhorted everyone that as missionaries, they must to learn from the missionary par excellence - Jesus - how they can bear Him for the people they serve, as did their saintly founders. The insightful and prayer-filled event ended with simple refreshments.

May 7, 2017: "The People of Israel as God's Chosen Community: Its Meaning and Impact in our Community Living" by Fr. John Lucas RCJ.

July 15, 2017: “The Christian Community in St. Peter’s Epistle: Its Insights and Challenges in our Time” by Fr. Ulrich Gacayan RCJ. 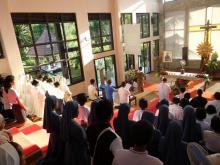 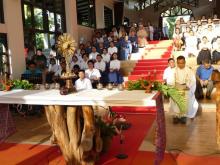 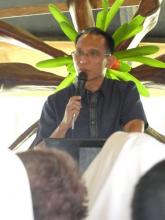 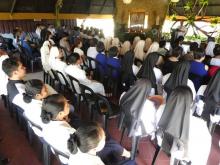 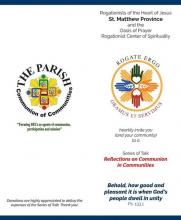