Kitiwum, September 25 - Anglophone regions in Cameroon is now in "House Arrest" due to the political crisis. The separatists declared of no movements and so they blocked the roads, warned to close businesses and offices while fighting against the La Republique. Killings are all over the regions, massacres, murders, abductions, stealing from both sides of the military and the separatists. But we are more afraid of the military. Electricity has been cut too. Some congregations had left already here in the Diocese of Kumbo including our sisters DDZ. Pray for us! - Fr. Jeffrey Jagurin, September 25, 1:50am (Philippine Time) 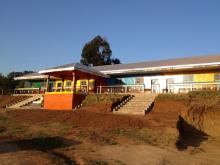