(Sep. 25, 2018) The Rogationist mission in the Diocese of Kumbo, Northwest Cameroon is in a precarious security crisis situation which is experienced widespread in the English-speaking regions in the north south and northwest of the country, brought about by the Anglophone separatist movement that intends to breakaway from the French-speaking majority. Tensions and violence have rapidly precipitated in the past weeks due to the separatists' resolved to disrupt the presidential election scheduled on October 7, by sowing fear of reprisal if people participate in the elections. There are reports of unofficial roadblocks, presence of armed groups, sporadic gunfire, thefts, abductions and even killings, on both the side of the separatists and the military. Electricity and telecommunication are also disrupted from time to time. In response, government forces have set up check points and patrols, and the governor has imposed curfew from 8PM to 6AM for an indefinite period. Night travel has been banned, and day travel has been limited, due to incidence of burning of buses and to unofficial roadblocks. Out of fear, people prefer not to leave their homes; stores, businesses and offices remain closed, even at daytime, turning the villages and centers into ghost towns.

Fr. Jeffrey Jagurin, the Rogationist parish priest of Sacred Heart Church in Kitiwum went on foot for a “pastoral visit” yesterday morning to one mission out-station to appraise the situation on the ground. He was accompanied by some youths of the parish, passing through trails and steams so as to avoid the main roads which remain dangerous. He visited families who gladly welcomed his group. Upon returning to the parish convent, the military arrived in the village firing gunshots.

The Parish has several chapels in the mission out-stations. It also runs two primary schools, one at the back of the parish church, and another in a village about 10 kilometers away. The repair and the completion of both school buildings were the projects of the Rogationist Mission Day 2016. The school year is about to start, but due to the crisis and for fear of parents and teachers for the safety of the children, schools have remained closed.

Fr. Jagurin requests for closeness in this moment of crisis in the country, and asks for prayers for the resolution of the conflict, and for a peaceful and credible elections. 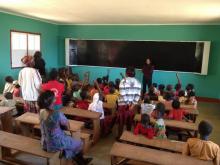 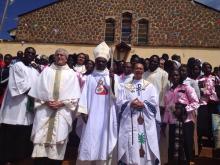