Fr. Antonio Fiorenza, the Superior of Our Lady of Guadalupe Delegation, made a Canonical Visit to the community of Sanger in California last April 12-13, 2016.

The Canonical Visit is an expression of fraternal communion to the religious in the community, also made complete with the encounter with the different pastoral groups representatives both in Del Rey and Sanger.

The official visit started with the Lauds and Morning Prayers done in the chapel of April 12. 2016. At 9,00 a.m. there was the report of the religious regarding their religious observance and parish apostolate. A bi-lingual 5,30 p.m. Mass at the small church in O’ street was presided by Fr. Antonio and concelebrated by Frs. John Bruno, Devassy Painadath and Edwin Manio, followed by a group encounter with the Parish Pastoral Council, which ended with pot luck dinner at the CCD rooms.

On April 13, there was the visit to the Fr. Hannibal House, a concluding meeting, and signing of documents in the morning. In the afternoon, there was a concelebrated 5, 30 p.m. Mass and blessing of the 7 new windows in Del Rey Mission. A despedida dinner was held in honor of Fr. Antonio Fiorenza, that was organized by Sr. Reina and the Mission collaborators. 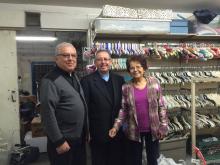 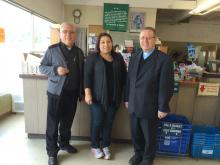 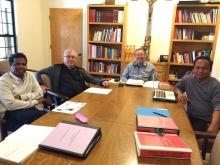