With the Archbishop signing the acceptance of the request of Fr. Rampazzo, the Rogationists of the Heart of Jesus is officially recognized in the Archdiocese of Gwangju. Previously, Fr. Rizzolo was present in the Archdiocese for several months a year to render pastoral service on a personal capacity.

Fr. Ezpeleta thanked the Archbishop for giving the Rogationists the opportunity to participate in the life and ministry of the Archdiocese. The Archbishop and his Auxiliary Bishop indicated the possible areas of collaboration, namely, in the apostolate with the poor and migrants.

Moreover, the Archbishop also granted permission to keep the Blessed Sacrament in the chapel of the Rogationists in their apartment unit in Gwangju, South Korea.

As an act of recognition of the grace received, the confreres culminated the day with a Thanksgiving Mass in the room-turned-chapel of the apartment. On the following day, Dec. 7, after the celebration of the Mass, the confreres spent a moment of Eucharistic Adoration to thank the Lord for the gift of His Presence, which is concretely evident in the Sacramental presence in the tabernacle of the chapel of the Rogationists at Gwangju, South Korea. They recalled the experience of St. Hannibal Mary Di Francia on July 1st 1886, when the chapel of Avignone became sacramental. Welcoming Jesus in the Blessed Sacrament serves as an act of entrusting everything to Jesus the life and mission of the Rogationists in South Korea. 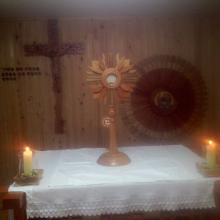