In celebration of the Feast of St. Hannibal Mary Di Francia and the 150th year of the Founder's inspiration of the Rogate, the St. Matthew Province received the gift of seven religious, who made perpetual profession of their Vows. One of them, Bro. John Baptist Nguyen Thanh Huy, perpetually professed in the Missionary Station of Vietnam, and another one, Bro. Marselinus Koka, made his in the Missionary Station of Indonesia, while five others, Bro. John Francis Aberion, Bro. Jose Roque Arreza, Bro. Andru Iroy, Bro. Tom June Lancin and Bro. Petrus Marianus, made their total and permanent consecration to God at the Holy Spirit Chapel of the Fr. Di Francia Center of Studies on June 1, 2018. Fr. Herman Abcede, who in his homily in the Holy Mass which he presided over, invited the religious to "magnify the Lord in their lives". Within this same liturgy, he also received the renewal of vows of twenty-two religious students, remembering as well the other seventeen, whose vows where accepted by the respective delegated superiors and responsible of their communities where they presently serve. Completing the rites held within the Eucharistic celebration, Fr. Joseph Arcaño, representing his batchmates, Fr. Unny Pottokkaran (now Councilor General in the General Curia in Rome) and Fr. Antonio Dammay (now Parish Priest of St. Catherine in Zaragoza, Pangasinan), who were in their current places of ministries, reminisce the very first time they embraced the evangelical counsels twenty-five years back by making a devotional renewal of commitment as a Rogationist religious and priest before his confreres of the St. Matthew Province and other guest. May the Lord constantly shower his vineyard with numerous and holy laborers!

Enclosed is the message of the Father General. 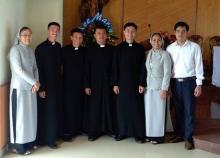 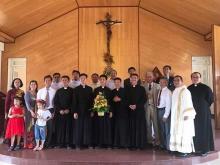 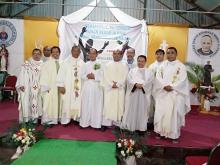