The celebration of the Rogationist Mission Forum promptly started at 9:00 AM with the Holy Mass presided by His Lordship George Nkuo, Bishop of Kumbo and concelebrated by Fr. Willy Cruz, Provincial Superior of St. Joseph Quasi-Province; Fr. Jessie Martirizar, General Councilor for the Missions who came purposely for the event; Fr. Philip Golez, from the Community of Edea; the two resident missionaries: Fr. Jeffrey and Fr. Rey; Fr. Anthony Lawir, Secretary for Catholic Education of the Diocese of Kumbo, and some other diocesan priests. The church was overfilled with the faithful coming from 5 mission stations that compose the Kitiwum Zone: Kaiy, Takui, Shukai, Kaale and Kitiwum.

During his homily the Bishop remembered in a special way, the Superior General Fr. Angelo Mezzari, who was celebrating his birthday on that day, and invited the people to pray for his intentions. He also thanked the Congregation of the Rogationists of the Heart of Jesus for choosing their new mission in Kitiwum Mission as the beneficiary for the project of solidarity of the Rogationist Mission Day 2016:  the rehabilitation of the Primary Schools of Kitiwum and Takui. These two schools belong to the Catholic Mission Zone of Kitiwum, under the care of the Rogationist Missionaries, Fr. Jeffrey Jagurin and Fr. Rey Villamonte. He particularly mentioned that in the same mission zone the Saint Aloysius Minor Seminary is located which is the seedbed of vocations for the Diocese of Kumbo. Thus, he considered it very providential for the Diocese to have the Congregation of the Rogationists whose charism is to pray for more holy vocations in the Church. The solemn mass, integrated with traditional songs and dances lasted for more than 3 hours.

A short tea break followed after the Eucharistic celebration. At 11:45 the second part of the Program started with the invocation prayer led by Rev. Father Rey Villamonte, the assistant collaborator of the Kitiwum Catholic Mission, followed by a welcome address given by the Bishop, thanking the Superior General Fr. Angelo Mezzari for sending the Rogationist Delegation to the Mission Forum with the General Councilor for the charity and Missions, Fr. Jessie Martirizar and the Benefactress Mrs. Silveria Salazar and her son Sherwin, who came all the way from the Philippines. He also reiterated the importance of the prayer for vocations. He thanked the Rogationists for the initiative of the Mission Forum and invited the people to offer their collaboration in order to realize the project.

The program continued with a short introduction given by Fr. Jeffrey Jagurin, Responsible of the Kitiwum Mission, wherein he remembered also Fr. Saji Kappikuzhy with whom they started the Rogationist presence in Kitiwum and initiated this project proposal to the General Government. Fr. Jeffrey mentioned the first concern of the Rogationist was to organize the parish, but following the invitation of the Fr. General they also put a particular consideration on the rebuilding of the school.

Then, according to the Program, a series of Conferences followed: Fr. Anthony Lawir, Catholic Education Secretary of the Diocese of Kumbo gave a general overview of the status of Education in Camerun, particularly in the Diocese of Kumbo and underlined the importance of Catholic education in the promotion of the human person and ultimately, in the fulfilment of his vocation. According to him, Catholic education is an expression of the Church’s work of evangelization, and catholic families choose Catholic schools because they are as an extension of their families. At the end of his intervention he expressed his gratitude to all the parents, guardians and people of good will in Kitiwum Zone for the support of Catholic Schools and above all for sending their children in the Catholic School. He also thanked all the teachers in Kitiwum for their sacrifices and the Rogationist Fathers for the marvelous works they are doing in Kitiwun Zone not only in ministering the Church but above all as far as the school is concerned.

The pupils of Kitiwum Catholic School rendered a moving intermission number that brought the audience to tears.

Fr. Jessie Martirizar, began his conference by quoting the message of the Superior General for the Rogationist Mission Day 2016, explaining the motivation behind the choice of Kitiwum for the project of solidarity.  In his conference he described the degrading situation of the two primary schools and hence in response to this need, the Rogationist Mission Day 2016 - “Project Kitiwum: the rehabilitation of the Primary Schools of Kitiwum and Takui”. He presented the scope, stages of implementation, the monitoring and the impact of the project proposal.

Another intermission number was rendered, this time, by the pupils from the Catholic School of Takui with their traditional dance.

The event resumed with the Open Forum, wherein the audience are invited to express their expectation about the project as well as their contribution for the sustenance of the project. This was concretely manifested during moment of Fund Raising that immediately followed. In spite of their poor situation, everyone present, starting from their respective traditional leaders, came forward towards the altar, dancing to the rhythm of traditional drums and music, bringing their share. To the surprise and delight of all, even a group of Muslim brothers also came forward to give their contribution. God have surely loved to see such joyful givers. The total amount collected was 788.725  FCFA (= 1.204,16 Euro) plus $1.000 dollars from the part of Madame Silveria Salazar, a benefactor from the Philippines.

Fr. Wilfredo Cruz, RCJ concluded the Mission Forum thanking everyone beginning from his Lordship Bishop George Nkuo, the clergy of Kumbo especially to Fr. Anthony Lawir, all the confreres in Cameroon, and special thanks to the generosity of the two young missionary priests, Fr. Jeffrey and Fr. Rey.

At the end, the Lord Bishop reminded the people not anymore to say “Kitiwum Zone”. Instead, he shouted several times “Kitiwum…” and tell the people to answer “…Parish!”. Then he imparted the final blessing to all the people present before the start of the sumptuous lunch.

On the following day, April 3, Sunday of Divine Mercy, Fr. Jessie presided the thanksgiving Mass in for the success of the Mission Forum, with the full participation of faithful that filled once again the “Parish” Church. After the holy Mass a token of appreciation, from the part of the Chief of Kitiwum Village, was given to Fr. Jessie Martirizar and Madame Silveria Salazar. In the evening of Sunday the Lordship Bishop George Nkuo invited all the Rogationist delegation in the bishop house for a dinner before they will depart to Yaoundé the following day. 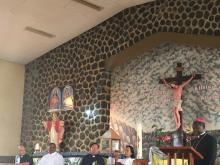 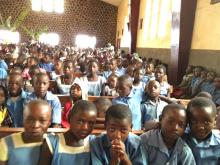 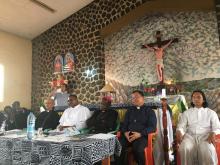 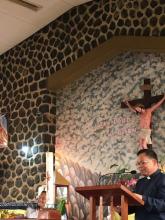 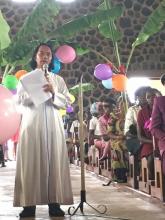 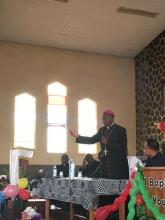 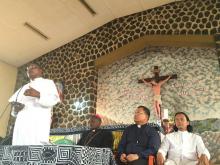 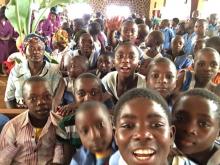 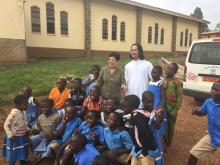 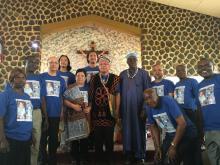 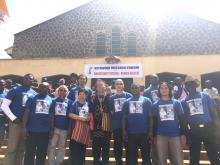 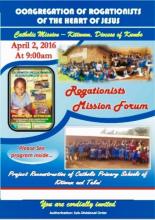 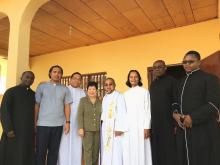 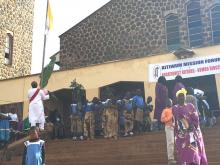 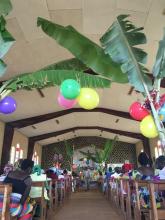 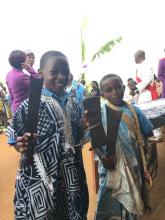 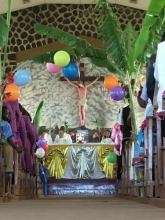 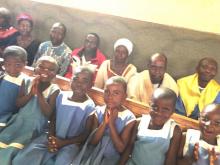 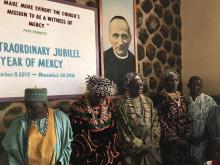 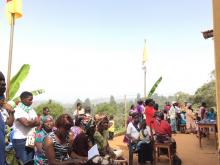 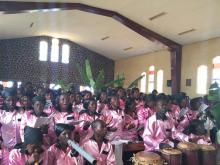 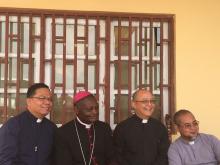